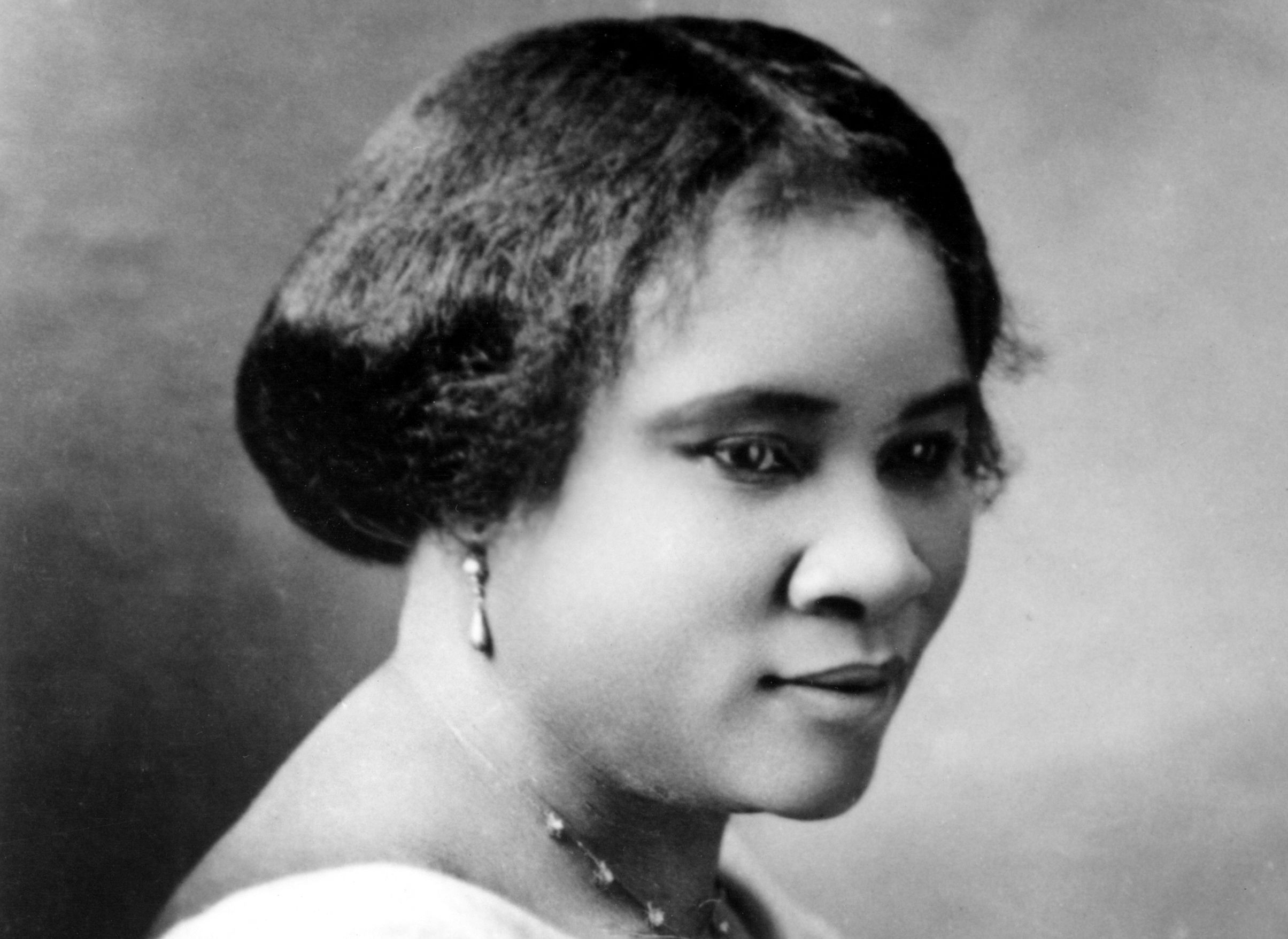 Madam C.J. Walker (1867-1919), was an early 20th-century entrepreneur who created a successful business manufacturing and selling hair-care products for Black women. In a rapid 13 years, her eponymous company grew to have sales in the upper five figures (the equivalent of nearly $10 million today). Often dubbed the “first self-made millionairess in the U.S,” she was one of the wealthiest African Americans of her time. As her fortune and fame grew, Madam Walker became a noted philanthropist and Black-rights advocate, as well.

Walker was born Sarah Breedlove in 1867, the fifth of six children to two ex-slaves-turned sharecroppers in Delta, La. Though she received only a rudimentary education from local Sunday schools, she did learn how to read and write, even as she worked in the fields and, later, as a laundress. Orphaned at a young age, she lived with relatives and married at age 14.

After her husband died, leaving her with a daughter, Sarah moved to St. Louis in 1889, where several of her brothers worked as barbers (which may have started her interest in hair care). She continued working as a laundress and as a cook. Beset by hair loss, she met and began receiving treatments from a local Black entrepreneur, Anne Pope-Turnbo, who ran a hairdressing business, around 1902-03. They improved her scalp’s condition and Sarah went to work for Pope-Turnbo, selling her remedies and treatments door-to-door.

In 1905, Sarah moved to Denver, to represent Pope-Turnbo’s line as a sales agent there.

In 1906, Sarah decided to strike out with her own hair treatment. She claimed the idea and the ingredients for it came to her in a dream, relayed by “a big black man” who recommended a “remedy …from Africa”; but it’s more likely she simply analyzed and tweaked Pope-Turnbo’s products—possibly with the help of a pharmacist friend, who boarded in a house where she moonlighted as a cook.

In ads and notices she placed for Pope-Turnbo, Sarah had been styling herself as Mrs. C.J. Walker, having married Charles Joseph Walker shortly after moving to Denver. Now, with an investment of $1.25, she launched her first product, Madam C.J. Walker’s Wonderful Hair Grower, a coconut oil-and sulfur-based conditioner. A palpable hit, it garnered her $1,000 in income that year.

It was soon joined by other treatments, creating an entire regimen that Walker demonstrated on a year-long sales tour throughout the south. Revenues tripled. In 1908, she moved to Pittsburgh, opening a school to train “hair culturists” in her products and regimen. In 1910, she relocated to Indianapolis, making it the headquarters of the Madam C.J. Walker Manufacturing Company and building a factory there.

Branch offices, salons, and other training schools in various cities followed, and by 1913, Walker was traveling to expand her business to the Caribbean and Central America.

And business was booming. In 1910, the company grossed over $10,000 annually; by 1913, it was bringing in $3,000 a month (around $84,000 in today’s dollars). The exponential growth continued, as the company expanded nationally and internationally. As documented in Walker Company annual reports and tax records at the Indiana Historical Society, the Walker Manufacturing Company posted annual earnings of:

Walker company’s sales were generated primarily through mail order, at its network of Walker Parlors (beauty salons), or by its network of salespeople, who worked on commission. At its height, it had several thousand agents around the country to sell Walker’s products for hair. Along with the Wonderful Hair Grower, they included a Temple Grower, Vegetable Shampoo, Glossine (pressing oil), and Tetter Salve, a remedy for the scalp. She also began selling cosmetics in 1918.

The number of sales agents trained by the Madam C.J. Walker Manufacturing Company between 1906 and 1920.

Madam Walker benefitted from the rise of a black middle class in the early 20th century, which had discretionary income to spend on beauty and self-improvement, But she was also notably prescient in her business approach, adopting techniques that seem quite contemporary. Among her strategies:

Incorporation/Self-investment: When establishing the Madam C.J. Walker Manufacturing Company, Walker had the foresight to incorporate it in 1911; she put $10,000 of her own funds into it, making herself the sole holder of 1,000 $10 shares. This move ensured that the company and its products had full protection under the law, affording its founder a legal status few African Americans at the time could claim for their businesses.

Vertical integration: Along with doing its own manufacturing, Walker’s company managed sales and distribution in several ways: It had a mail-order business, it operated hair salons and treatment centers, and it invested heavily in its sales force of independent, but closely allied, agents. It operated schools to train them (or got its methods taught at black colleges).

The company also offered agents plenty of support and perks, organizing them into a national association (the Madam C.J. Walker Hair Culturists Union of America) with annual conventions and local clubs. Being a Walker agent was not just a job, but a calling: “Be the Walker Type…The Way to Beauty and Success,” as one of her advertisements urged prospective applicants.

Publicity and promotion: There was no lack of Black-oriented beauty and hair care products In Walker’s day, but she used canny self-promotion to make her wares stand out. Her advertising and press constantly used her image and told her “from the washtub to the boardroom” story. Of course, this personal touch strengthened the legitimacy of her products, sending a “they’ll work for you as they did for me” message.

Walker offered herself up as a role model—in an era when Black women didn’t have many—not just for hair, but for a better existence. She lived well and showed it, displaying her mansion, her four cars, her well-appointed office. She cannily balanced these displays of the good life with generous gifts to and support of African American causes and institutions. One of the first 20th-century Black celebrities, she knew she made good copy and kept her image well-burnished.

While acclaimed in her lifetime, Madam Walker received the bulk of her honors posthumously. She has been inducted into several halls of fame, including:

Her likeness is represented in the National Great Blacks in Wax Museum in Baltimore, and her image appeared on a U.S. postage stamp in 1998.

She received a Distinguished Service Award from the Direct Selling Association and has an award named after her, given by the National Coalition of 100 Black Women’s Oakland/Bay area chapter, at its annual Annual Madam C.J. Walker Luncheon and Empowerment Forum.

In 2007, her career became the subject of a Harvard Business School case study.

Along with her income from the company, Walker invested in real estate, jewels, antiques, and art. At the time of her death, her personal assets were worth close to $600,000, or $17.07 million in 2021.

As Walker’s wealth increased, so did her philanthropic outreach; she frequently expressed the desire to “help my race.” Early in her career, in 1911, she contributed $1,000 towards the building of a black branch of the YMCA in Indianapolis; towards the end, in 1918, she organized and led the effort to pay off the mortgage on Frederick Douglass’s home and pledged $5,000 to the NAACP’s anti-lynching campaign in 1919. Each of these gifts constituted the largest single donation made by an individual at the time—a frequent characteristic of her charitable sums. Along with many other similar contributions, she also paid for the tuition of six students at the Tuskegee Institute.

Walker’s will stipulated that two-thirds of the Madam C.J. Walker Manufacturing Company’s net proceeds should in future go to “the benefit of worthy charities.” She also earmarked $10,000 for an African mission school.

Walker’s daughter Leila (later A’Leila) worked with her mother during the company’s early days, heading supply and mail-order operations at the various home offices, and was one of its three board members (her stepfather, whom Madam Walker eventually divorced, was the third). Leila, who moved to New York in 1913, is credited with getting Madam Walker to establish a base there, just as Harlem was beginning to grow as a center for Black commerce and arts.

In 1919, after Madam Walker died, Leila inherited the company, becoming its president. But she was more of a hands-off manager. Instead, she became an influential hostess and patron of the arts—a key fixture on the Harlem Renaissance scene during the 1920s. Langston Hughes dubbed her the “Joy Goddess of Harlem.”

It’s always hard to identify definitively anything or anyone as “the first.” The Guinness Book of World Records lists Madam C.J. Walker as the first self-made American woman millionaire (as opposed to one who inherited or married into a fortune). Certainly, there were other Black Americans and other Black women, contemporaries of Madam Walker’s, who reportedly amassed wealth in the seven figures—though few kept as reliable figures on their finances as she did.
Even with the documentation, though, it’s not clear exactly how wealthy Walker was. Newspaper stories of the time often referred to her as a “millionairess,” even though she denied—sometimes in the same article—she had that much. When she died in 1919, her personal assets and real estate investments were worth $600,000, and her company—in which she had a controlling stake—had annual revenues of close to $500,000; its breakup value would have been at least $1.2 million. By this calculation, Walker was definitely a millionaire, with an estimated net worth of well over one million.

What Happened to the Madam C.J. Walker Company?

The Madam C.J. Walker Manufacturing Company continued to exist after its founder’s death in 1919 and even thrived for a while during the 1920s. It was hard hit by the Great Depression but still managed to survive until the early 1980s. The factory closed in 1981, and the corporation itself changed owners a few years later. The trademark was sold by the Madam Walker trustees to an entity that manufactured some of the original formulas for the next three decades. Sundial Brands purchased Madam C.J. Walker Enterprises in 2013 and launched a line of products under the name Madam C.J. Walker Beauty Culture in 2016. The following year, Unilever acquires Sundials Brands. As of 2022, the MADAM by Madam C.J. Walker product line is available at Walmart.

What Was in Madam C.J. Walker’s Hair Growth Product?

Credited as the first self-made African American woman millionaire, Madam C. J. Walker embodies the classic American success story: rising from an impoverished background to create a business empire, armed with only a basic education and her own ingenuity and determination. At the time of her death, her company had an estimated worth between $1.2 and $1.5 million (around $34.3-$42.7 million in current dollars).

Decades before the Civil Rights movement, Walker used her position as a successful entrepreneur to foster Black pride and promote Black rights and equality. Her company gave employment to thousands of African Americans and marketed its products around the world. She also encouraged women’s economic independence—not just by giving them jobs (as she did in her factory, offices, and salons), but by training them to be self-employed salespeople, and by serving as a powerful role model. She blended the aesthetic, the personal, and the political to create a remarkable career and an enduring legacy. 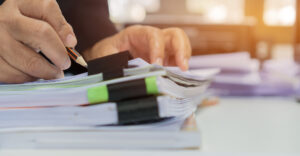