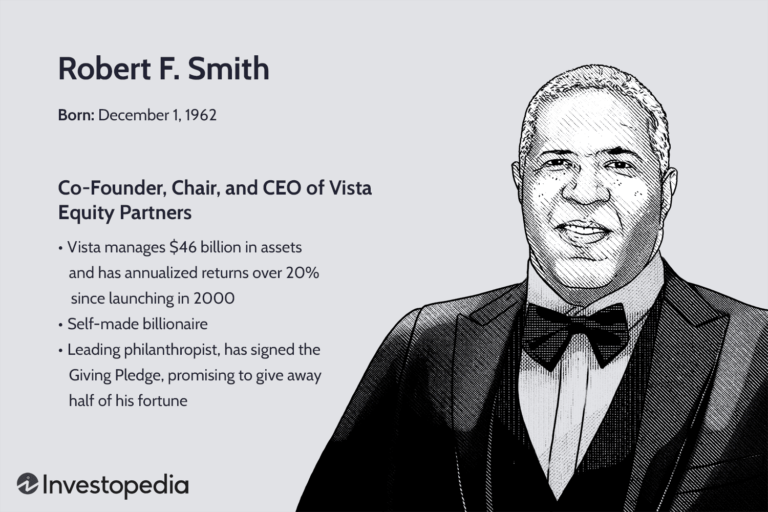 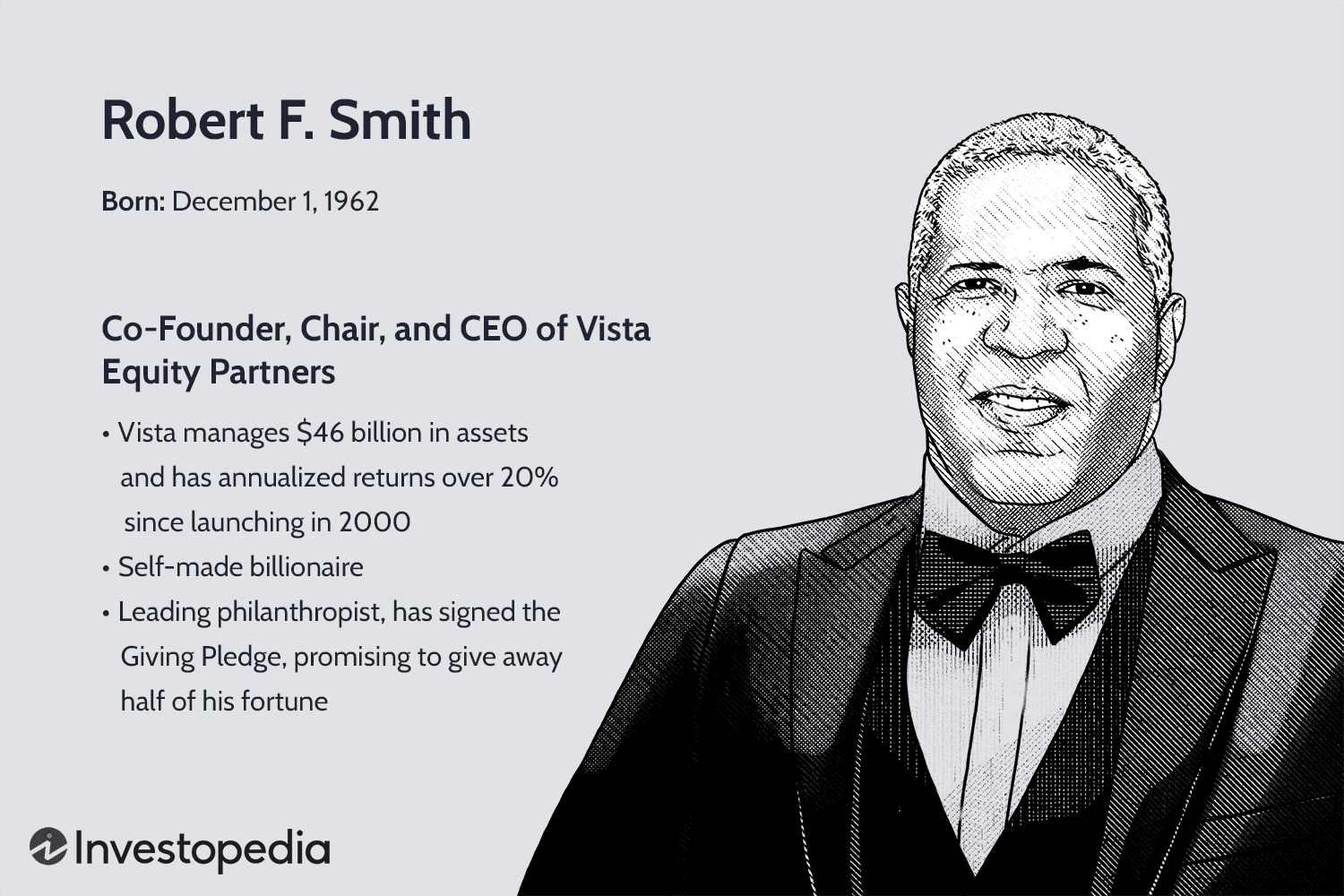 As the Founder, CEO, and Chair of Vista Equity Partners, which has invested exclusively in software, data, and technology-enabled organizations since inception, Robert F. Smith is known as one of the pioneers of sector-focused private equity investment. At year-end 2021, Smith oversaw total AUM (assets under management) of $86 billion in private equity, permanent capital, credit, and public vehicles across over 70 enterprise software companies with 75,000 employees, 800,000 customers, and over 200 million users in 175 countries. Of note, the combined revenue of these portfolio companies would make Vista one of the largest enterprise software companies in the world. As of January 2022, Vista was in seventh place on the list of the Top 10 Private Equity Firms in the World.

With a net worth of $6.7 billion, Smith was the richest Black person in the U.S. and the third richest Black billionaire in the world in 2022.

Robert F. Smith (born 1962) grew up in a primarily Black, middle-class neighborhood in Denver, Colo. His parents, who were both school principals with doctoral degrees, instilled in Smith a deep respect for philanthropy and the value of education. He recalls watching his parents write checks to the United Negro College Fund every month—even when the family was on a tight budget.

In high school, Smith excelled in computer science, which motivated him to apply for an internship at Bell Labs. When he was told that the internship was open only to college students, he stayed in touch with the company by calling every day for several months to express his continued interest—and his tenacity paid off. When the MIT student chosen for the internship failed to show up, Bell Labs offered him the position. To prove himself during this internship, Smith developed a reliability test for semiconductors.

After graduating from Cornell University with a B.S. in Chemical Engineering (1985), Smith spent several years as an engineer at Goodyear Tire and Rubber Company, Air Products & Chemicals, and Kraft Foods, where he was named as the principal inventor on four separate patents, two in the U.S. and two in Europe. From 1992 to 1994, Smith completed an M.B.A. in Finance at Columbia Business School.

In 1994, Smith was recruited as Co-Head of Enterprise Systems and Storage at Goldman Sachs, where he spent six years overseeing $50 billion in M&A (mergers and acquisitions) transactions for the investment giant’s portfolio of technology companies, which included Apple, Microsoft, Texas Instruments, eBay, and Yahoo. Initially based in New York City, Smith moved to San Francisco in 1997 to establish Goldman’s M&A business in Silicon Valley. By 2000, Smith was ready to launch his own investment firm.

In 2000, Smith and a former Goldman colleague, Brian Sheth, founded Vista Equity Partners, a private equity firm focused on investments in enterprise software across industries, from healthcare to O&G (oil and gas). Over the next two decades, Smith built Vista into one of the largest and most successful investment firms in the technology sector. In addition to a strong track record of savvy buyouts that delivered big payouts, Smith’s decision to focus Vista exclusively on enterprise software built a portfolio of over 70 companies with 75,000 employees, 800,000 customers, and over 200 million users across 175 countries. Although Vista is a private equity firm, the combined value of these portfolio companies would make Vista Equity Partners the fourth largest enterprise software company in the world, after Microsoft, Oracle, and SAP (as of 2021).

In 2000, Smith’s decision to focus exclusively on investments in enterprise software was met with skepticism. Potential investors were hesitant about debt financing for software businesses, which have few hard assets (unlike hardware companies) as well as high levels of technical debt, i.e., the cost incurred by software companies when they have to rework computer code due to the common practice of prioritizing speed over quality to meet deadlines.

To overcome these entrenched misgivings about software, Smith presented the future revenue streams of subscription-based businesses as debt-tolerant—and then expertly positioned Vista as the ideal investment firm to pioneer this untapped market. As a former investment banking colleague from Goldman described it in 2018: “Robert, over time, convinced an entire market to see this cash-flow stream of software revenue as a reliable annuity that could be financed with debt.”

Under Smith’s leadership, Vista has returned high multiples of invested capital and industry-leading rate of returns across funds since inception. In 2019, Vista raised a record-breaking $16 billion of outside capital for a new technology fund, Vista Equity Partners Fund VII LP—the largest technology fund ever raised by an independent private equity firm.

True to his engineering background, Smith has described Vista’s proprietary (and secret) formula to transform acquired companies into profitable businesses as “a very simple methodology” that involves the highly systematic implementation of over 100 operating procedures, known as Vista Best Practices. The first step happens pre-acquisition. In addition to buying only companies that have software determined to be mission-critical to their clients, Vista acquisitions must demonstrate that certain key performance drivers (called “critical factors for success”) are under their control.

Post-acquisition, a team of 100 internal experts—the Vista Consulting Group (VCG)—launches a “meticulous” series of cross-enterprise protocols designed to completely overhaul the business and upgrade all processes, procedures, and systems to Vista standards. These protocols range from administering standardized personality and IQ tests to building automatic price increases/renewals into contract templates and incentivizing cross-selling with commissions.

In a 2018 Wall Street Journal article, a former Vista Managing Director described the process as a factory. “A deal comes in and it gets compartmentalized, and they apply experts on each compartment. After it goes off the assembly line, the margins are higher.” From the perspective of the founder of an acquired company, this “meticulous” Vista process leaves nothing to chance. For example, the Vista Consulting Group goes far beyond merely suggesting commissions to incentivize cross-selling. Instead, the Vista team hands the acquired company a commission template, complete with “formulas” in a “spreadsheet” with “seven tabs.”

Recognition of Smith’s investment acumen has included being named one of Forbes’ 100 Greatest Living Business Minds (2017) and one of Bloomberg’s 50 People Who Defined the Year (2019). In 2019, he was inducted into the Texas Business Hall of Fame.

As one of the most active U.S. philanthropists, Smith has been recognized with multiple awards, including the Carnegie Medal of Philanthropy in 2019 for “his contributions as a philanthropist and dedication to educational programs that create opportunities for current and future generations.” In addition to signing Warren Buffett’s Giving Pledge—a commitment to donate the bulk of his wealth to philanthropic causes—Smith’s long list of donations includes $20 million to the National Museum of African American History in 2016.

Smith grabbed international headlines in 2019, when he announced during Morehouse College’s commencement address that he would eliminate student debt for the entire 2019 graduating class. In addition to paying off $34 million of debt for the 400 graduates, Smith later committed to pay off any outstanding student debt held by their parents.

After paying off the Morehouse student debt, Smith pledged to reduce student debt at other institutions, with a focus on HBCUs (historically Black colleges and universities). After setting up the Student Freedom Initiative (SFI), a nonprofit to provide financial and career support for HBCU students, he funded the new philanthropy with one donation of $50 million from himself and another $50 million from the Fund II Foundation, where he serves as Founding Director and President.

As reported in The New York Times, Smith made headlines in 2020, when he entered into a non-prosecution agreement and paid $139 million to the IRS to settle “one of the biggest tax evasion cases in American history.” Smith was never charged with any crimes and Vista Equity Partners was never named in the investigation. As part of the agreement, Smith agreed to cooperate with ongoing investigations into the primary target of the tax evasion case: Robert Brockman, a Texas billionaire Smith first met in 1997, during his tenure in investment banking at Goldman. According to court filings, when Brockman invested $1 billion to set up the very first Vista fund in 2000, he gave instructions on how to structure his investment, including the use of “offshore companies and trusts to avoid paying taxes on any capital gains from the investments the Vista fund made.” In a statement to prosecutors, Smith described these efforts to conceal money offshore as “baked into” the original deal, i.e., Brockman had made it a “take-it-or-leave-it” condition. Faced with losing a career-making opportunity, Smith told Forbes that he had “one of those man-in-the-mirror moments” and decided to agree to Brockman’s terms.

Despite the high-profile media attention on the case, Vista investors “barely blinked,” and Smith emerged from the scandal “unscathed.” The New York Times gave credit for this rapid recovery not only to the fact that “Vista’s buyout funds have historically performed above average” but also to Smith’s expert handling of investor communications about the case. “The firm was quick to alert investors—who dislike surprises and value disclosure—that trouble was brewing.” When the news broke, investors were already bracing for it, so Smith continued to have their full confidence as the investor who would always deliver. The New York Times cited a Vista marketing document that outlined funds that have “collectively generated an internal rate of return (IRR)…of 31% for investors,” which is significantly better than Vista’s private equity competitors with typical returns “in the low 20% range.”

What Does Robert F. Smith See as the Future of Tech Investment Strategy?

When asked about the future of investment strategy in the tech sector at the 2021 Macquarie Technology Summit, Smith predicted that software will continue to dominate. “Unlike hardware, software doesn’t have a defined shelf life.”

In 2018 interview at the Gartner Symposium, Smith credited his internship at Bell Labs with changing his life, particularly the mentoring he received from a senior engineer who instilled in young Smith “the joy of figuring things out.”

What Did Robert F. Smith Invent?

Smith’s two U.S. patents are for a coffee brewer filtration device (1993) and a coffee brewing element (1995).

According to Forbes in 2022, Smith had a net worth of $6.7 billion, which makes him the richest Black person in the U.S. and the third richest Black billionaire in the world.