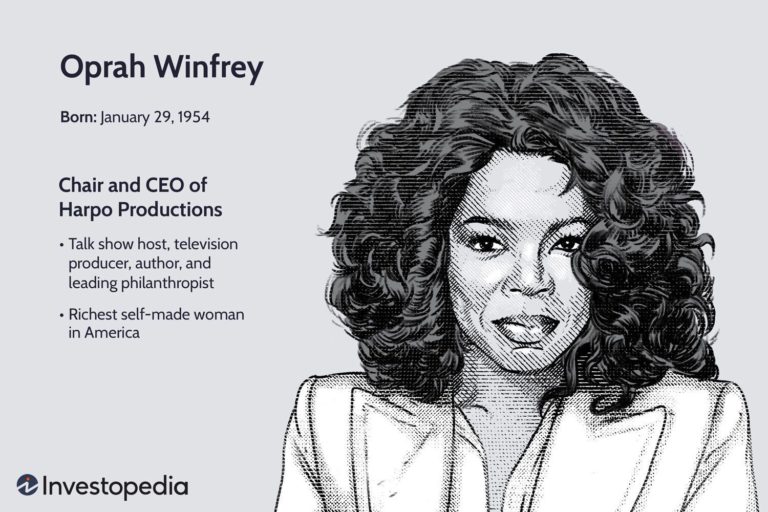 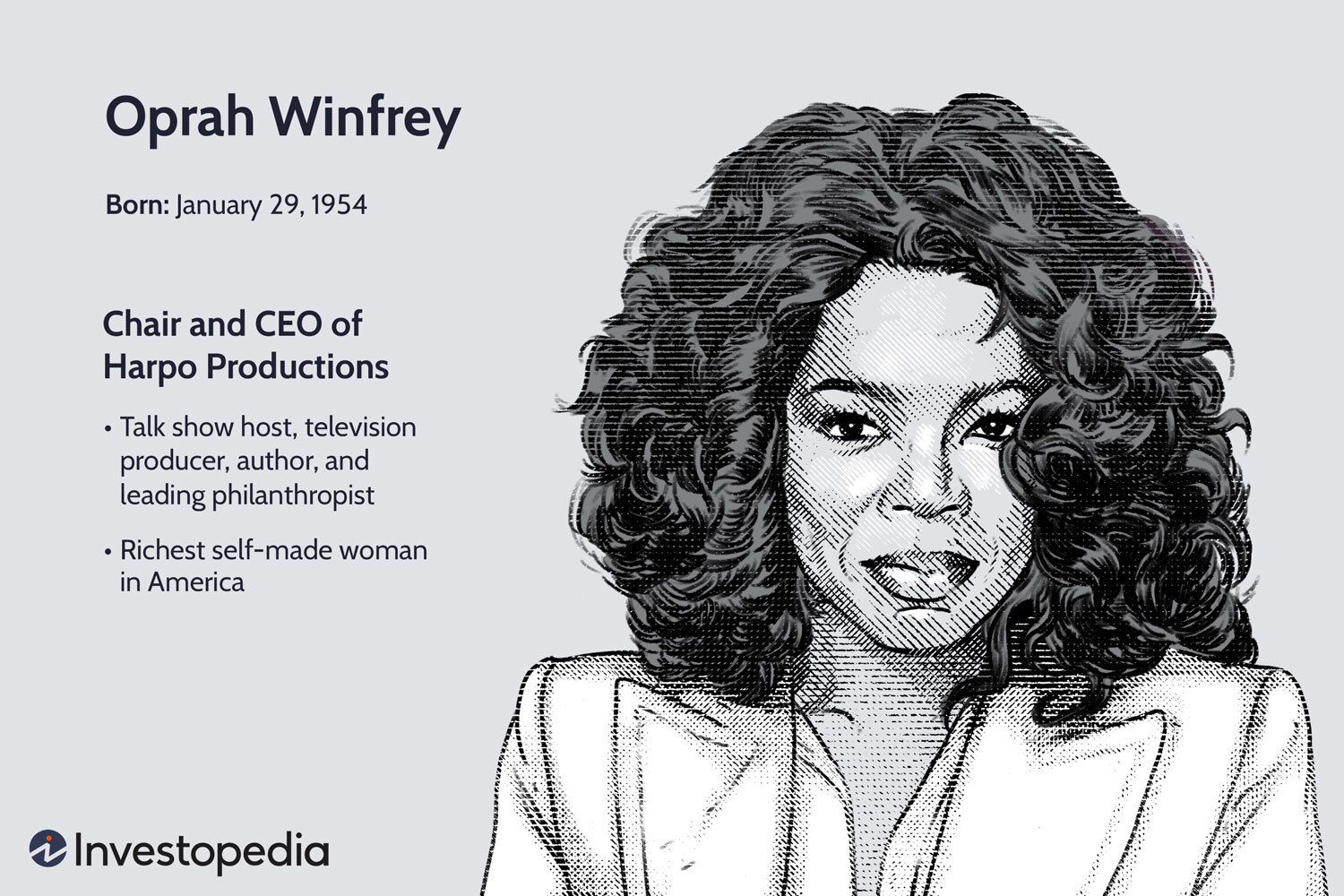 Who Is Oprah Winfrey?

Oprah Winfrey is a beloved American icon and billionaire. She is a multimedia executive, actress, writer, producer, talk show host, and philanthropist whose reach and success extends to nearly all aspects of media. A self-made success story, Winfrey is the recipient of hundreds of awards, from The People’s Choice Award for her talk show to the prestigious  National Civil Rights Museum’s Freedom Award in 2005.

Winfrey founded and is chair and CEO of a multimedia production company, Harpo Productions and founder of O, The Oprah Magazine. She is also a spokeswoman and partial owner of many brands, including WW. Her generous philanthropic work reaches local, national, and global platforms.

Although Oprah Winfrey ended the iconic Oprah Winfrey Show in 2011, her empire continues to thrive and grow, leading to her reported $2.5 billion net worth.

Oprah Gail Winfrey was born on a farm in Kosciusko, Mississippi, on January 29, 1954. Her parents were Vernita Lee and Vernon Winfrey, who separated shortly after she was born. Her maternal grandmother raised her. As a child, she was precocious and learned to read at a very young age, according to some reports, as young as two-and-a-half. When she was six years old, she moved to Milwaukee to a neighborhood steeped in poverty.

She later, at age 12, moved to Nashville, Tenn., to be raised by her father. She later, as a teenager, returned to her mother’s home in urban Milwaukee. Winfrey has spoken about the sexual and physical abuse she suffered during her early years living in Milwaukee. She moved back and forth between her parents’ homes during her teen years. Winfrey credits her father’s strict guidance and dedication to education for helping her grow into a responsible and educated young woman despite her hardships. She was a star student and won a full scholarship to Tennesse State University.

She won several accolades at university, including being invited to a White House youth conference, crowned Miss Fire Prevention, hired to read newscasts at a local radio station, and won Miss Tennesse and Miss Black Nashville titles. At age 19, Winfrey landed her first television job at WLAC-TV (now WTVF), a CBS station in Nashville, Tennessee. In 1976, she transferred to WJZ-TV, the ABC affiliate in Baltimore, Maryland. But after struggling to maintain the objectivity required to report news, she defected to a new morning talk show called People Are Talking, which aired in 1977. Winfrey’s casual, improvisational style helped her develop a natural rapport with guests who felt comfortable telling their personal stories. By the decade’s end, the show beat Phil Donahue’s program in the local ratings.

In 2001, her triumph even became the subject of a University of Illinois college course entitled “Oprah Winfrey, the Tycoon.”

In January of 1984, Chicago’s ABC affiliate WLS-TV offered Winfrey a 30-minute morning talk show called AM Chicago. Within one year, the show rocketed from the last place to the top of the rating heap. In 1986, legendary film critic Roger Ebert encouraged Winfrey to license her show for a national audience through syndication. Her program was renamed The Oprah Winfrey Show and expanded to an hour in length.

At the age of 32, Winfrey became the first African American nationally syndicated television host. That same year, Winfrey was nominated for an Academy Award for Best Supporting Actress for her role in the film The Color Purple. She also launched the television production company Harpo Inc., making her the first Black person, and the third woman to control her own major studio.

Maintaining ownership of her show freed Winfrey to expand her business endeavors. In 1998, she co-founded Oxygen Media, a programming company geared to women. She also laid the foundation for the 2000 publication of O, The Oprah Magazine, she co-authored multiple books on diet and exercise, and she launched her influential Book Club in 1996.

With her continued success in the 21st century, Winfrey became a billionaire. She co-produced a Broadway musical version of The Color Purple, created the Oprah.com website, and launched a 24-hour channel called Oprah Radio on XM Satellite Radio. She continued hosting her talk show until 2011, after which she created OWN: Oprah Winfrey Network, of which she is the CEO. In 2015, Oprah bought a 10% equity stake in Weight Watchers International (WTW) and became a spokeswoman for the popular subscription weight loss program.

Oprah Winfrey has won hundreds of prestigious honors and awards, so many that it is impossible to name them all here. She won the prestigious  National Civil Rights Museum’s Freedom Award in 2005. A longtime political advocate, Winfrey campaigned for President Barack Obama, who subsequently awarded her with the Presidential Medal of Freedom in 2013, this was the same year, she received honorary degrees from Duke and Harvard.

In 2018, Winfrey was awarded the Cecil B. DeMille Lifetime Achievement Award at the 75th annual Golden Globes. During her acceptance speech, Winfrey expounded on sexual harassment issues in Hollywood.

Winfrey is a major philanthropist in the United States and abroad, particularly in South Africa, where she has championed girls’ education. She has donated more than $400 million to higher education, including 400 scholarships at Morehouse College in Atlanta, Georgia.

Due to her own personal history of abuse, Winfrey started a campaign for a national database of child abusers in 1991 to help those who were victimized. President Bill Clinton signed what is known as “Oprah’s Bill” in December 1993, the centerpiece of the National Child Protection Act, which created a national registry of convicted child abusers.

In 1987, Winfrey established the Oprah Winfrey Foundation as a way to “support the inspiration, empowerment, and education of women, children, and families around the world.” Her motto of “intent and service” is truly lived as recognized by her unfailing and unflagging commitment to helping those in need. Her foundation has given out thousands of grants to nonprofits that support the safety, empowerment, and education of women, children, and others less fortunate. Her Angel Network has formed partnerships and alliances with other philanthropic groups, such as Paul Newman’s nonprofit.

When Covid-19 hit the U.S. in March 2020, Winfrey committed $12 million to assist vulnerable persons and communities hardest hit by the virus, especially in cities and states where Oprah has lived, including Mississippi, Nashville, Chicago, and Milwaukee.

Oprah Winfrey grew up in poverty and suffered sexual abuse as a child. As an adult, she has made it one of her life missions to improve the lives of girls and women who have also suffered abuse, and to help children and families escape poverty and she supports educational endeavors both in the United States and abroad, especially in South Africa.

Due to her own personal history of abuse, Winfrey started a campaign for a national database of child abusers in 1991 to help those who were victimized. President Bill Clinton signed what is known as “Oprah’s Bill” in December 1993, the centerpiece of the National Child Protection Act, which created a national registry of convicted child abusers.

Oprah Winfrey is not married and she does not have children but she does have a long-term companion of over 30 years, Stedman Graham, an author, teacher, and business executive.

Is Oprah Winfrey Worth a Billion Dollars?

Yes. Oprah Winfrey is a self-made billionaire whose net-worth is estimated to be $2.5 billion.

Oprah Winfrey is known for her extremely charitable and philanthropic talents.

Is the Oprah Winfrey Show Still On?

Winfrey’s hard work, resilience, and business acumen have led to her unparalleled success across multiple industries, making her the richest self-made woman in America.

Her achievements are especially impressive given the obstacles she’s overcome, including poverty, abuse, and discrimination. She continues to offer her talents, expertise, and financial acumen to support those in need, from her multimedia company to her foundation, and beyond. 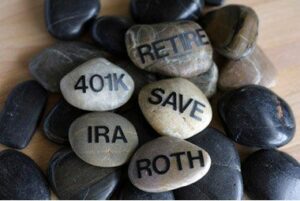 September 29, 2022
We use cookies on our website to give you the most relevant experience by remembering your preferences and repeat visits. By clicking “Accept All”, you consent to the use of ALL the cookies. However, you may visit "Cookie Settings" to provide a controlled consent.
Cookie SettingsAccept All
Manage consent