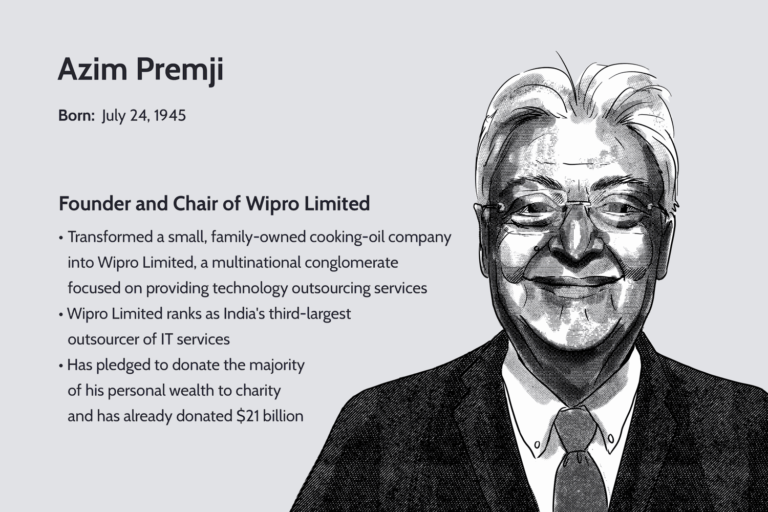 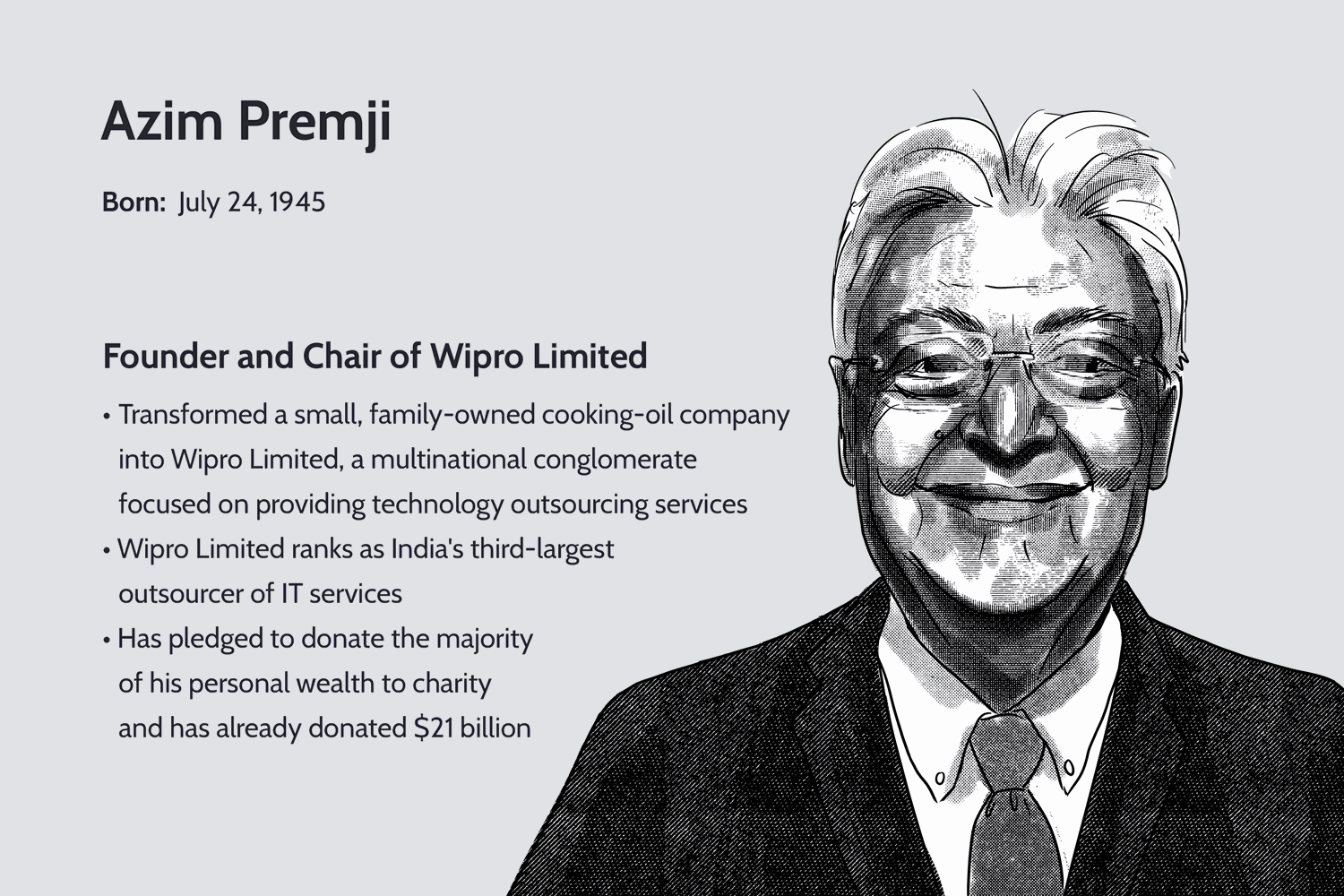 Azim Premji is one of India’s wealthiest people, who is, perhaps, best known for his philanthropy, rather than his wealth and business skills. As of April 2022, Forbes reported Premji had a net worth of $9.8 billion.

He derives his wealth from his ownership of Wipro Limited (WIT), an information technology (IT) company that ranks as India’s fourth-largest outsourcer of IT services. In this article, we review Premji’s rise from the owner of a small, family-run business to one of India’s most influential entrepreneurs.

Wipro was founded as Western Indian Vegetable Products Ltd. in 1945 by Mohamed Premji, father of Azim Premji, as a manufacturer of hydrogenated cooking fats. At the time, Premji’s father was already an established rice merchant.

Azim Premji completed his schooling in Mumbai and was pursuing electrical engineering at Stanford University in the United States when, in 1966, he returned to India after his father’s sudden death.

More than 30 years after leaving Stanford, Azim Premji returned to complete his engineering degree, which was awarded in 1999.

He then became the chair of Wipro at the age of 21 amidst shareholder revolt. He expanded the company’s product line to include hydraulic cylinders, soaps, and lighting products, renaming the company Wipro in 1977.

Wipro entered the IT space in 1980 after IBM withdrew from the country. The company first manufactured microcomputers under a technology-sharing agreement with U.S.-based Sentinel Computers. Later, it provided software solutions to complement its hardware operations.

The 1980s saw a series of ventures by Azim Premji and Wipro. He started a manufacturing plant for producing hydraulic tipping systems in 1983, followed by the manufacturing of industrial cylinders and hydraulic cylinders.

One of the many reasons—and perhaps the most significant—that Azim Premji will be remembered is for his philanthropy. He has already given away $21 billion of his wealth as part of the Giving Pledge, a commitment by the world’s wealthiest individuals to donate the majority of their wealth to charitable causes. Premji was the first Indian and third non-American to make this pledge.

Premji also gifted two-thirds of his Wipro stock, which is held in a separate trust for educational purposes. The Azim Premji Foundation, founded as a non-profit organization in 2001, aims to enhance primary education in India. It also established a university in Bengaluru, India, and works with schools and governments in various districts of India to improve education in a holistic way, rather than just through financing.

Also noteworthy, Azim Premji has built an organization with a reputation for being an ethical company committed to specific core values. He has also taken a keen interest in creating high-performance teams.

Following India’s economic deregulation in 1991, Wipro further diversified into the manufacturing of lamps, powders, oil-based natural ingredients, medical and diagnostic equipment, and IT hardware products such as printers and scanners. It also entered the IT services business in the 1990s and was one of the first to experiment with offshore IT services.

In 1999, Wipro became the only Indian computer manufacturer to receive Y2K-compliant certification from the National Software Testing Laboratory in the U.S. It also entered into a joint venture with KPN to provide Internet services in India. The following year, Wipro was listed in the U.S. via American Depositary Receipts and emerged as one of India’s largest software exporters and the second-largest listed company in India.

Throughout the late 1990s and early 2000s, Wipro continued to perform well, with IT remaining its core business. It also opened a Business Process Outsourcing (BPO) unit in 2002 and was one of the best-performing stocks from 1998 to 2003 on the Indian stock exchanges.

Premji created a culture of striving for excellence in business operations. And Wipro, being one of the first software companies to get SEI Level 5 certification, successfully implemented the objectives that were part of this culture.

The exit in 2005 of chief executive officer (CEO) Vivek Paul, who was instrumental in making Wipro a billion-dollar enterprise, led to Azim Premji becoming the CEO until 2008. This was followed by a change in corporate structure that led to the installation of joint CEOs until 2011 when there was a reversion in the company back to a single CEO.

The company added a chief operating officer (COO) to support the CEO and look after day-to-day operations, product delivery, and customer satisfaction. The installation of a COO allowed the CEO to focus on global operations and future strategies. After the global financial crisis of 2008, Wipro’s revenue growth stagnated, forcing management to restructure its business model to find new business outside of the U.S. market and within its domestic market.

Under Premji’s leadership, Wipro’s revenues grew from around $2 million in the late 1960s to around $7 billion in 2014, with IT contributing approximately 75% of total revenue. In July 2019, Azim Premji stepped down as the chair of the board of Wipro and passed the reigns to his son, Rishad. In its 2018-2019 annual report, the company reported annual revenue of $8.4 billion.

Azim Premji has his own family wealth management company, Premji Invest, which manages around $1 billion of his wealth and invests in public and private companies.

Who is Azim Premji?

Where is Azim Premji house?

Azim Premji owns how many shares in Wipro?

Azim Premji and his family own 73% of Wipro’s shares.

Azim Premji is one of India’s most well-known and respected business leaders and has received many awards during his lifetime, most notably India’s second-highest civilian honor for his contribution to business. He was also selected as one of the 30 Greatest Global Entrepreneurs of all time by Business Week and was named one of the 100 most influential people in the world.

He transformed Wipro under his leadership from a $2 million cooking fat company into a conglomerate spanning multiple businesses that consistently generate billions of dollars in revenue each year. Premji is indeed one of the pioneers in developing the IT sector in India and putting it on the global stage.

But perhaps his most lasting legacy will be how he used his wealth to improve the lives of others who are less privileged.