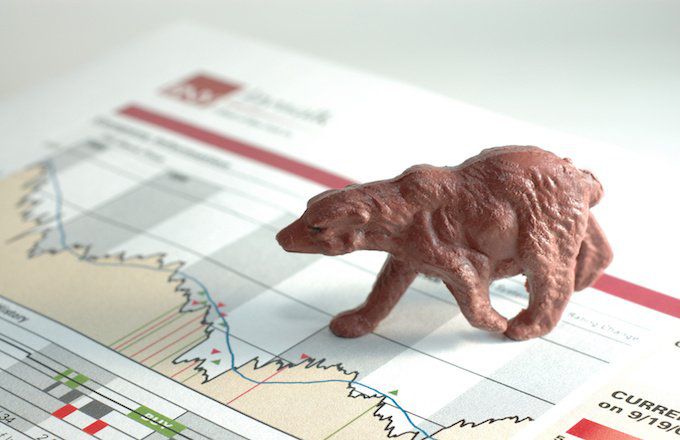 Bear markets are prolonged ranges where securities head lower. There is much debate around the exact conditions that need to be met to officially be declared a bear market, but the most accepted definition is a sustained period of usually two months or more where security prices fall 20% or more from recent highs. Bear markets are often accompanied by negative investor sentiment or periods of weak or declining economic growth such as recessions.

Since April 1947, there have been 14 bear markets that have ranged from one month to 1.7 years. On average, bear markets lasted 11.3 months with an average cumulative loss of -32.1%. Another form of market selloff is called a correction. The most common definition of a correction is when security prices move lower by 10% from the recent highs. Like in a bear market, a correction is often accompanied by investor pessimism or negativity.

For the purposes of this article, the exact boundaries between a correction and a bear market are not of significant concern. The crux of what is important to most investors is how a certain group of companies—those that occupy the middle of the business curve, known as mid-caps—perform during periods of weakness. In this article, we’ll look at how mid-cap companies perform during periods of market weakness relative to their more popular large-cap counterparts.

As mentioned, mid-cap companies occupy the middle of the business lifecycle. Typically, a mid-cap company has a market capitalization of between $2 billion and $20 billion. This group is usually of interest to investors because mid-cap companies have moved beyond the risks that are associated with early-stage businesses and have significant room for growth and expansion.

Historically, mid-caps have performed well relative to large-cap counterparts when prices were rising. According to research conducted by S&P Dow Jones Indices, mid-cap companies, as measured by the S&P 400 Mid Cap index, outperformed the S&P 500 and S&P 600 between Dec. 30, 1994, and May 31, 2019, at an annualized rate of 2.03%, and 0.92% respectively. Past performance, especially when viewed in comparison, is never a guarantee of future performance. The arguments of expected price behavior are only based on opinion and are only for informational and planning purposes.

Many would suggest that higher returns would be expected due to the higher level of risk associated with the relatively smaller size. However, it is interesting to note that the same performance profile was not present during periods of market declines. More specifically, when looking at monthly returns, the average excess return posted by the mid-cap group was -0.08%.

In other words, using history as a guide, mid-cap investors would look for prices to significantly outperform large caps during up months and only slightly underperform during down markets. Since the mid-cap group is about 15% more volatile on average, the risk/reward profile that is outlined above would likely be acceptable for many types of investors.

One of the most significant bear markets in history occurred between 2007 and 2009. During this 1.1-year span, markets suffered a total return of -51.9%. Looking at the chart, you can see that the S&P Mid-Cap Index and the S&P 500 moved in near lockstep for much of the period. Relative to the large-cap index, the mid-cap index has a strong tilt toward sectors such as industrials, materials, and utilities. On the other hand, the large-cap index offers greater exposure to technology.

The fundamental sector composition of mid-cap and large-cap funds along with the nature of investor sentiment during periods of market weakness ultimately play a major role in how correlated prices are. Often, during bear markets, all segments are highly correlated as investors are scrambling to find the exit and sell-off positions regardless of their fundamental qualities.

The market declines in 2011, while not technically considered to be a bear market, were significant because of the high level of negative investor sentiment. From late 2009 through 2012, the European sovereign debt crisis was a major threat to global economic growth. As you may recall, at that time, several eurozone member states such as Greece, Portugal, Spain, and Ireland were having difficulties servicing their government debt and required third-party assistance to bail out some major financial institutions. Meanwhile, back in the United States, 2011 marked the first year in history that S&P downgraded the creditworthiness of the U.S. federal government to a rating below AAA.

With concerns of slow global economic growth ruling the day, investors started to fear recession, and equity prices started to decline. Looking at the chart below, you can see that the mid-cap segment of the market was strongly correlated to the large-caps and that they started to underperform as domestic economic growth concerns ramped up in the later part of the year.

During the period of 2015-16, concerns again started to mount around the weakening prospects for economic growth. This time, slower-than-expected GDP growth from China sparked a sudden decision to devalue the yuan by 3% relative to the U.S. dollar. On Aug. 24, investors panicked and looked for the exits. The flood of selling pressure sent the Chinese Shanghai Composite Index down by 8.5%.

Looking at the chart below, you can see that mid-caps had a strong performance at the beginning of the year with the typical type of divergence between the major indexes as seen during rising markets. As prices started to decline, mid-caps started to underperform. This chart clearly illustrates how mid-caps lead the way when market prices are rising, and how prices between the segments can tend to move more in tandem when prices are falling.

It was a difficult year for North American investors in 2018. Concerns of a trade war with China, threats of higher interest rates, and lingering fears of an economic slowdown caused investors to send prices lower. In the case of 2018, it is interesting to see how prices moved in lockstep for the first part of the year, but as economic concerns started to deepen, then the mid-caps started to underperform.

This chart highlights the double-edged nature of mid-caps and how the extra level of volatility and risk that is associated with the smaller mid-cap segment can work against investors’ best interests when the markets are concerned about future growth.

The onset of the COVID-19 pandemic in early 2020 was filled with fear and uncertainty. The lockdown orders and sudden changes to day-to-day business highlighted the key role of technology in today’s world. The added exposure to large-cap technology companies helped cushion the returns of the S&P 500 in relation to the mid- and small-cap segments.

How many bear markets have there been in the U.S?

How much more volatile are mid-cap stocks compared to large-caps?

Between 1994 and 2019, the mid-cap group was about 15% more volatile than large-caps. During the same period, the S&P 400 outperformed the S&P 500 and S&P 600 indexes by an annualized rate of 2.03% and 0.92% respectively. Using history as a guide, mid-cap investors would look for prices to significantly outperform large caps during up months and only slightly underperform during down markets. This type of risk/reward profile is one of the reasons many investors seek exposure to mid-cap companies.

What is the difference between a correction and a bear market?

Historically, mid-cap companies have posted strong returns relative to large caps during periods when markets were rising. Conversely, during periods of falling market prices, the higher risk associated with the smaller size can tend to cause the mid-cap group to slightly underperform.

Investor risk tolerance and investment horizon are the integral components of the type of allocation that this segment deserves within a diversified portfolio. In short, the mid-cap segment is a deserving candidate for investors who are looking for higher excess return relative to the large-cap indexes while also assuming a reasonable amount of risk.