Walt Disney (DIS) has grown into a household name in family entertainment and a leading international media conglomerate. Founded in 1923 as the Disney Brothers Cartoon Studio by brothers Walt and Roy Disney, the company now boasts a market capitalization of $335.0 billion. It generated a net loss of $2.5 billion on revenue of $65.4 billion during its 2020 fiscal year (FY), which ended Oct. 3, 2020.

Under the leadership of Bob Chapek, who took over from Robert Iger as the company’s CEO in February 2020, the company operates through the following business segments: Media Networks; Parks, Experiences and Products; Studio Entertainment; and Direct-to-Consumer and International. Iger took back the CEO role in November 2022.

Acquisitions are a major vehicle of growth for Disney—and have been over the past three decades. Studio Entertainment, the foundation upon which the company was built, is an example. While Disney produces high-quality video content under its own name, it has used acquisitions to become the owner of intellectual property rights to its blockbuster film and TV franchises. It bought Lucasfilm (owner of the “Star Wars” franchise), Marvel Entertainment (owner of a long list of Marvel heroes, including Spider-Man and Iron Man), and Pixar (which created the “Toy Story” and “Cars” franchises and other hits.) The company also distributes content through three major acquired brands—ABC, ESPN, and 21st Century Fox—as well as through its own Disney Channel. The acquisition of a majority stake in BAMTech in August 2017 and purchase of 21st Century Fox in March 2019 were key deals in the company’s launch of digital content streaming service Disney+.

Below, we look in more detail at the company’s seven largest acquisitions.

When Disney acquired the company in 2019 for $71 billion, the entertainment business was renamed TFCF Corp., and many of the news assets were spun off into a new, separately owned public company called Fox Corp. (FOX). Through that series of deals, Disney became the owner of a basket of prized global franchises, including the 20th Century Fox film and TV studios, cable networks FX and National Geographic, international TV business Star, and a 30% interest in Hulu LLC. Disney also retained perpetual rights to certain Fox brands, including 20th Century Fox and Fox Searchlight. The acquisition significantly augmented Disney’s ability to provide more content and entertainment options to meet growing consumer demand.

Capital Cities/ABC was formed in 1985, when media firm Capital Cities Communications acquired American Broadcasting Company for $3.5 billion. Disney’s $19 billion purchase of the company in 1995 was considered the second-largest corporate takeover ever, bringing together two of the world’s leading media and family entertainment companies.

In November 2019, Disney launched its Disney+ streaming service, a paid subscription service that competes with the likes of Netflix, Hulu, and Apple TV.

Pixar was created in 1986 when Steve Jobs, the legendary co-founder of Apple, bought the computer animation division from Lucasfilm, which made major progress in perfecting animated film technology. Under Jobs, Pixar turned into the world’s premier animated film producer. It created “Toy Story,” the world’s first computer-animated feature film, as well as movies such as “Finding Nemo.”

Disney’s $7.4 billion purchase of Pixar in 2006 made it an instant leader in animated films. Under Disney, Pixar has produced films such as “Cars,” “Ratatouille,” “WALL•E,” and several sequels to “Toy Story.”

Lucasfilm was founded in the San Francisco Bay Area in 1971 by filmmaker George Lucas. The studio is best known for creating and producing the blockbuster “Star Wars” and “Indiana Jones” franchises and has been a leader in developing special effects, sound, and computer animation.

Disney’s acquisition of the company in 2012 gave it access to the distribution rights of those high-grossing franchises. Disney also has leveraged those franchises through its theme parks and resorts, such as the “Star Wars: Galaxy’s Edge”-themed entertainment area at Disneyland and Disney World.

The precursor to what would become Marvel Entertainment was founded in the 1930s under the name Timely Comics. The comic book publisher went through various name changes, different ownerships, filed for bankruptcy, and developed into a premier creator and publisher of entertainment media with a library of 5,000 characters, including Spider-Man, Iron Man, X-Men, Captain America, and the Fantastic Four.

Disney leveraged its $4 billion purchase of the company to accelerate the number of movie releases starring Marvel characters, including box office hits such as “The Avengers” (2012), “Iron Man 3” (2013), “Black Panther” (2018), and many more.

Fox Family Worldwide was formed in 1995 by a joint venture (JV) between Haim Saban and Fox Broadcasting, an affiliate of billionaire Rupert Murdoch’s News Corp. Prior to being acquired by Disney, the company had become one of the world’s leading vertically integrated global family and children’s entertainment companies. Through the deal, which occurred in late October 2001, Disney acquired the Fox Family Channel in the U.S., which had about 81 million subscribers, as well as Fox Kids channels worldwide.

The acquisition was seen as a move by Disney to keep pace with its competitors during a period of consolidation in the media industry. It also gave Disney the rights to 6,500 episodes of children’s and family-friendly programming, as well as rights to show Major League Baseball games. Disney renamed the network ABC Family Channel. It has since been rebranded as Freeform.

In 2016, Disney acquired a 33% minority stake in BAMTech, which by then had become a global leader in direct-to-consumer streaming services, data analytics, and commerce management. The deal came with an option for Disney to acquire majority ownership, which it exercised a year later, purchasing an additional 42% stake for approximately $1.6 billion in 2017. The acquisition of a majority stake in BAMTech provided Disney with the assets that it would use to launch video streaming services ESPN+ in 2018 and Disney+ in 2019.

As part of our effort to improve the awareness of the importance of diversity in companies, we have highlighted the transparency of Disney’s commitment to diversity, inclusiveness, and social responsibility. The chart below illustrates how Disney reports the diversity of its management and workforce. This shows if Disney discloses data about the diversity of its board of directors, C-Suite, general management, and employees overall across a variety of markers. We have indicated that transparency with a ✔. 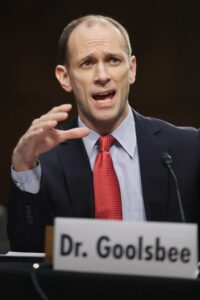 Obama Adviser Austan Goolsbee To Be Next Chicago Fed President

December 1, 2022
We use cookies on our website to give you the most relevant experience by remembering your preferences and repeat visits. By clicking “Accept All”, you consent to the use of ALL the cookies. However, you may visit "Cookie Settings" to provide a controlled consent.
Cookie SettingsAccept All
Manage consent